Fear of Missing Out (FOMO)

If you ask any of my friends, many of whom are clients and reading this right now, they will tell you I suffer from an extreme case of FOMO. Fear of missing out. I have passed it along to my daughter who will hold her eyelids open rather than go to sleep. Apparently, she thinks her mother and I throw a party every night when she goes to bed. As an adult, the fear isn’t missing out on a good time, but missing out on the best times, that make the best memories. I blame my father for my own FOMO, and here’s why.

I can’t remember the exact game anymore, but sometime in the early 90’s, my father brought my brother and I to a New York Yankee game as we had done so many times before. The Yanks were down 6 heading into the 7th inning. To two young boys, traffic is of no concern, but to my father the idea of sitting on the George Washington Bridge for 90 minutes in traffic was not appealing. So, we packed up and left, convinced the Yanks were destined to lose.

Well, they didn’t lose, mounting a comeback that was capped by a Don Mattingly (my favorite player in the world at the time) double to drive in the winning run in the bottom of the 9th. Enter my FOMO!

If you ask my children, they will tell you the one rule we have when going to Yankee Games now. We don’t leave until we hear “New York, New York” being played over the PA system!

We all suffer from FOMO

Whether it be sporting events, or dinners out with a group of friends, we all suffer from some level of a fear of missing out. One of the places that I have noticed human nature bucking the trend of having FOMO is when it comes to finances. Yes, I have had many calls with people beating themselves up because they did not see the Gamestop hysteria or Tesla hype happening in time, but those calls are few and far between.

All these acronyms make me feel like this is an episode of Wheel of Fortune.

When it comes to money, fear of loss (FOL) is a far more powerful driver than fear of missing out (FOMO). 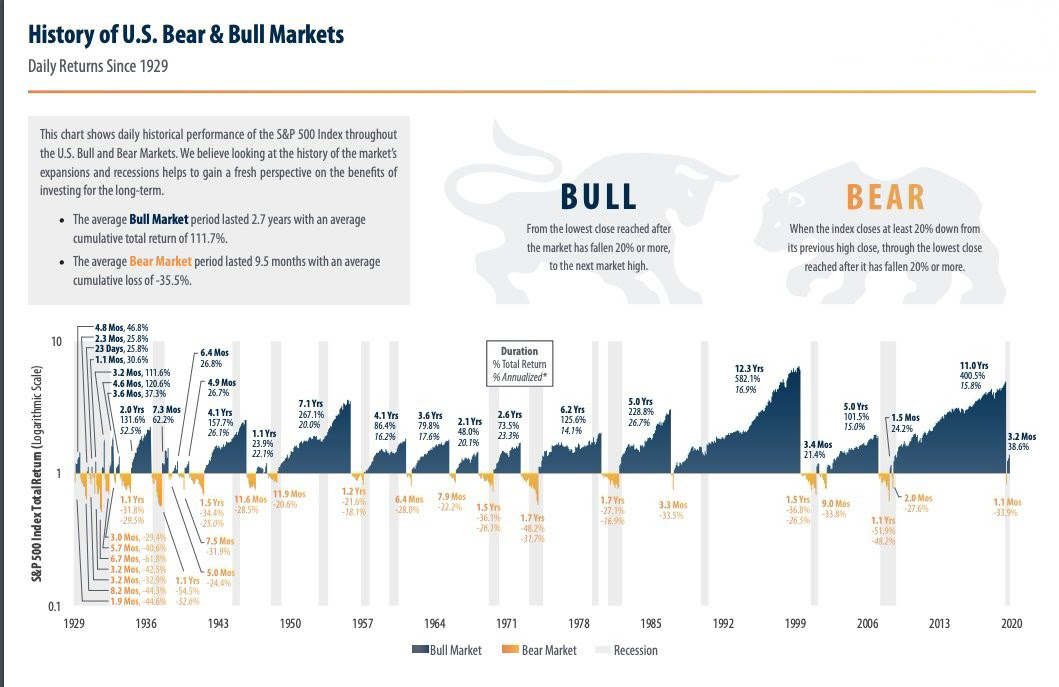 Rational or irrational, we are who we are

Most people spend all of their time afraid of the yellow parts in the chart above, when in reality their fear should be missing out on all of the blue parts! We spend so much time worried about seeing losses in our portfolios when we don’t even have plans to use that money in the near future. Just like watching Derek Jeter’s 3000th hit, it didn’t matter if you were in the front row, the last row, or watching on your couch at home. All that mattered is that you participated in it and got to experience it.

Building wealth requires the exact same thing. You need to expose your money to the market early and often, and continue adding to that exposure over time. You don’t need to buy at the bottom or sell at the top, you just need to be in the stadium for the entire game. Don’t let what is happening to your portfolio on a random Tuesday in June impact your plan when that money isn’t meant to be used until you retire in 10 or 20+ years.

Don’t let an irrational fear of loss or volatility cloud your judgement, and for one time in your life FOMO is a great thing to have when it comes to investing.

We all wish we could have invested in Amazon early, but many of you did simply by investing your money as early in your life as possible into index funds or other ETFs. Remember the example below. Start early and often to make sure you never feel investing FOMO.