The news on the novel coronavirus continues to roil markets and we are getting more frequent questions as to the likely economic and market impact, and what, if anything, investors should do about it. As recent reports shifted from rising recoveries in China to new cases in Europe, Asia, and, now, the U.S., investors are trying to ascertain the economic impact. Our recently conducted webinar can be found here. Does this mean that investors should change portfolio strategy? That very much depends on how your portfolios were positioned in the first place.

The fears over COVID-19 stem from the greater transmissibility of this virus versus SARS and from the higher casualty rate versus the common flu, even though the latter kills tens of thousands of people per year. As cases of coronavirus pop up on continents outside Asia, concerns are growing that limiting the virus’s spread will be a challenge, although new cases are slowing sharply in China already. There are now over 88,000 reported cases in 67 countries and China accounts for almost 80,000 of the totals. The WHO has declared that the spread has reached the highest level of risk for the world. The economic impact will reflect containment efforts as travel plans are cancelled, factories shut down, and consumers stay at home. The ripple effects will be far reaching. But the effects are almost certain to be temporary. We have seen other lethal infections roil markets in the past, and the market has recovered fairly quickly each time and gone on to make new highs. We expect the same to happen this time around – although the timing appears highly uncertain, as the virus seems to be in early stages of its global spread. But first, it’s important to put the market’s response into context. 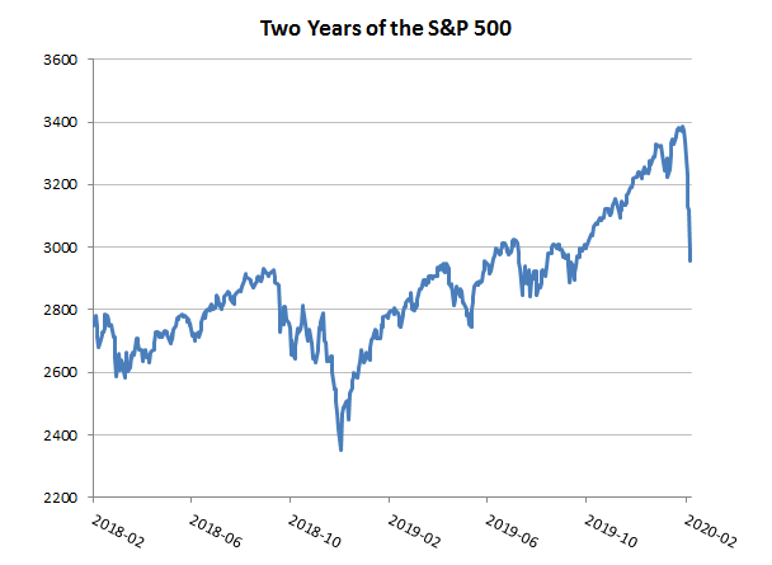 After the recent sell-off, the S&P 500 remains up 7.5% over the last two years, or about 3.7% per year. Over the last five years, the S&P has climbed 43%, or roughly 7.5% per year. These levels of appreciation reflect both actual and expected growth in company profits. It’s essential to remember that a company’s valuation reflects the amount of stuff it sells and the profits it generates through its entire future. The virus will clearly impact the profits of many companies during the first half of this year, likely into the second half, and maybe into next year. The total impact will depend on the extent of demand destruction and the degree to which supply chains are disrupted. But what are those supply chains and how does a virus in Wuhan, China affect production of Chevys in Detroit? Supply chains are clearly an important part of this story: the U.S. market has fallen 12.7% since the peak on February 19 even though there are relatively few cases here. 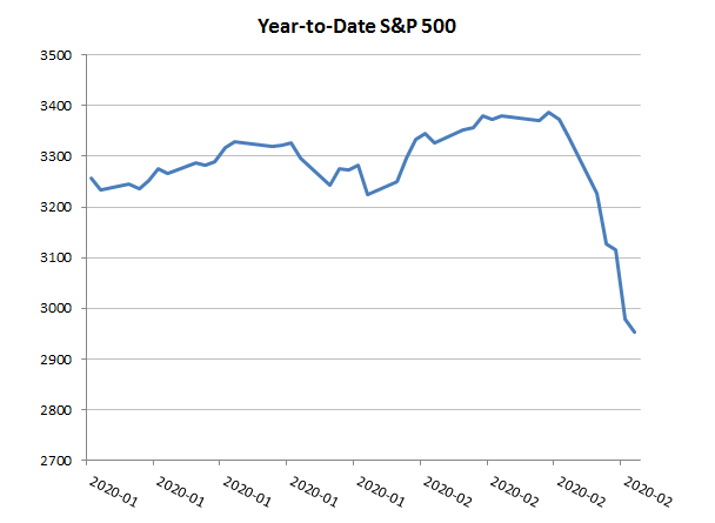 That 12.7% drop has wiped out over $3 trillion in market capitalization in the S&P 500. Is that likely to accurately capture the impact on companies? Does that make sense? A 12.7% drop would be justified if we expected those 500 companies to see a 12.7% decline in profits not just this year, next year, and the year after that, but forever. Alternatively, we can imagine a much greater drop this year and smaller drops in following years, but the effect would have to be the same – changes equivalent to a permanent evaporation of 12.7% of profits. That would require lost sales forever; no recovery. But if we look to past events, we have not seen such an impact. We have, by contrast, seen a quarter or two of declines in production and profits, and then a sharp recovery as factories re-open and pent-up demand turns into higher consumer spending. So it seems appropriate to conclude that some of the stock market decline reflects amplified fears, rather than reasonable estimates of the business impacts.

The global interconnectedness of supply chains makes disruptions to supply chains among our biggest concerns. In addition, demand destruction will hurt even purely domestic firms, and of course, global travel and leisure. Many companies closed factories, retail outlets, restaurants, and a myriad of other activities in efforts to stem the spread of the disease. And while these shutdowns have been mostly confined to China (thus far), roughly a third of economic activity around the world depends on parts created in one country and used in production in another. Valves made in China may end up in carburetors built in Indiana, which are then shipped to an auto assembly plant in Mexico. If those valves don’t get built because of a factory shutdown in China, that car may not be built in Mexico. Fortunately, the impact will be muted by inventories of parts, but those inventories tend to be fairly tight, so we can expect the availability of various goods—cars, iPhones, PCs, dishwashers, toys—to decline in coming months.

As companies reopen factories and ramp up production, those shortages will be alleviated, although with a lag. You can imagine that companies will be determined to get back to full capacity (or even above by adding shifts) in order to meet pent-up demand and to replenish depleted inventories. That’s why recoveries from these sorts of disruptions tend to be V-shaped. When they start, though, depends on when those factories can reopen and when consumers can return to the activities of ordinary living. Surprisingly, we are already starting to see plants reopen in China.

Can governments help? First, and most importantly, governments can act to contain the spread of the virus, and we are seeing that now. Still, the Center for Disease Control in the U.S. has warned that, given the nature of this one, we are likely to see more cases in the U.S. before the threat abates. Second, governments can use fiscal and monetary policy tools to help offset the unavoidable, though transient, economic impacts of the virus. Fiscal policy (tax cuts, spending) can stimulate demand and encourage firms to invest in capacity or hire more workers to prepare for the surge in demand that generally follows these events. Monetary policy (rate cuts, quantitative easing) can be used to keep the cost of money low and to encourage banks to lend, but there are no signs yet that companies need more liquidity. Simply by acting, fiscal and monetary authorities (around the world) may help maintain confidence among both firms and consumers, and that is likely to prevent a temporary shock from turning into a more persistent one.

History tells us that “this too shall pass” and investors should keep this in mind. Companies will suffer in the short term and the outlook may get worse before it gets better, but a strong recovery typically follows. Timing that turnaround would require knowing exactly when we will get good news out of the CDC or other medical experts. You can imagine how hard guessing the timing of that news would be, so selling stocks now and getting back in sometime “later” would be very tricky indeed. Instead, everyone’s investment strategy should incorporate the possibility of shocks like these – viruses, terrorist attacks, labor strife, floods, fires, etc. Admittedly, this is a bigger shock than we typically face, but the principle remains the same–stay diversified and make sure you have the appropriate mix of fixed income and equities in your arsenal so you can ride this out.

ACM is a registered investment advisory firm with the United States Securities and Exchange Commission (SEC). Registration does not imply a certain level of skill or training. All written content on this site is for information purposes only. Opinions expressed herein are solely those of ACM, unless otherwise specifically cited. Material presented is believed to be from reliable sources and no representations are made by our firm as to another parties’ informational accuracy or completeness. All information or ideas provided should be discussed in detail with an advisor, accountant or legal counsel prior to implementation. All investing involves risk, including the potential for loss of principal. There is no guarantee that any investment plan or strategy will be successful. ©ACM Wealth
0Shares
PrevNext
Email Marketing by Benchmark